Strategic Considerations: Holders of Tullow Oil's bonds and bank debt have started organizing into various groups and hiring advisors ahead of what could prove a contentious restructuring. With liquidity of around USD 1bn available in mid-November, some argue that Tullow should be expected to pay down its USD 300m 6.625% 2021 convertible notes on maturity. However, covenants under Tullow's bank debt significantly complicate matters, potentially forcing the company to address multiple bonds simultaneously. Added to this, a straightforward English Scheme of Arrangement could be off the cards as a restructuring mechanism, given that the convertibles were issued from a Jersey-based special purpose vehicle.

Various creditor groups of Tullow Oil, the stressed sub-Saharan Africa-focused exploration and production company, have organized ahead of the company’s anticipated liability management exercise, according to two people familiar with the situation.

Following pitches, a group of holders of the company’s USD 650m 6.25% 2022 bonds hired law firm Akin Gump Strauss Hauer & Feld last week, according to the people. That noteholder group is also said to be close to financial advisor Rothschild, the people said.

Holders of Tullow Oil’s reserve-based loan (RBL) hired Perella Weinberg as financial advisor and Clifford Chance as legal advisor, said the first and second people. Among the 18 banks that originally provided the commercial tranche of the RBL in 2017 were ING Bank, DNB, Natixis, BNP Paribas, Credit Agricole, Lloyds Bank and Bank of China.

However, at least one bank lender sought to reduce its exposure recently, auctioning a USD 42.5m piece in November, as reported.

Following a redetermination, the borrowing base available to Tullow as of 7 October under the RBL is USD 1.8bn. The company had drawn USD 1.5bn of the facility at end-2Q20. Bank commitments under the facility amount to USD 2bn. The loan matures at end-2024 and amortizes semi-annually starting in April 2021.

London-listed Tullow, which has significant producing assets in Ghana and Gabon and exploration licenses in Uganda and Kenya, brought investment bank PJT Partners on board over the summer to help address its capital structure, as reported. The company’s legal advisor is Latham & Watkins.

Tullow launched a bondholder identification process in mid-November, as reported, a move that normally precedes a company reaching out to noteholders regarding liability management.

Following the sale of its Uganda assets to Total, Tullow Oil said it had liquidity amounting to USD 1bn as of 10 November. The company received USD 500m in cash from the sale with an additional USD 75m consideration set to be paid upon Final Investment Decision. 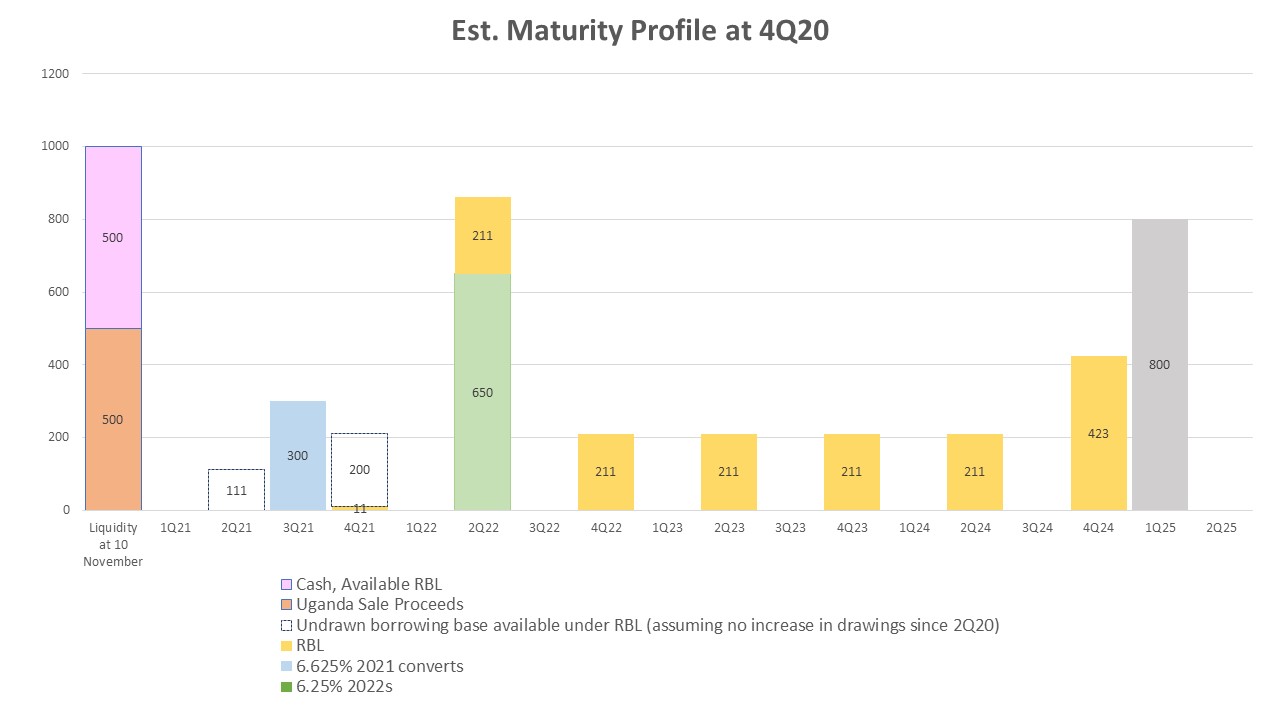 Liquidity available also includes available borrowing under the RBL, however, this will begin to reduce next year. Tullow’s USD 300m 6.625% 2021 convertible notes mature in July.

In anticipation of being unable to meet a 3.5x Net Debt/Adjusted EBITDAX gearing covenant under its RBL, the company has been seeking covenant waivers, as reported. It previously secured a waiver for the end-June 2020 test date, temporarily increasing permitted gearing to 4.5x.

Importantly, alongside the gearing covenant, the RBL features a Liquidity Forecast Test, under which the company must demonstrate it will have sufficient funds to meet its financial commitments for an 18-month period starting one month after RBL redetermination.

In its 2H20 financials, Tullow said its cash flow projections show a potential liquidity shortfall in the 18-month period following its next RBL redetermination in January 2021, as this period includes both the 6.625% 2021 and the 6.25% 2022 maturities. If Tullow fails the test in January and does not find a cure within 90 days – by end-April 2021 – the RBL falls into default.

This sets up the possibility of conflict between the 6.625% 2021 convertible notes and the 6.25% 2022 bond, said the first and third people and a fourth person familiar with the matter. In order to comply with the RBL liquidity forecast test, both bonds likely will have to be addressed simultaneously.

But with USD 500m in Uganda sale proceeds freshly arrived in the bank, holders of the 6.625% 2021 convertible notes argue the company is in a position to pay them down on maturity, according to the third person. Depending on future cash flows – largely a factor of oil prices – and progress on further asset sales, Tullow may not even need a full-fledged restructuring, said the second person.

The company recently announced it had secured license extensions in Kenya, assets which the company had previously also explored disposing.

As long as holders of the 6.625% 2021s resist any restructuring attempt, the RBL creditors will “give in” and provide leeway under the liquidity forecast – likely in exchange for a fee or down payment –  removing a major obstacle to Tullow repaying the convertible notes at maturity, the third person argued. The fact the 6.625% 2021s are indicated around 90 cents on the dollar suggests the market is pricing in this optimistic scenario, the person added.

However, the company may hope to secure a more comprehensive reorganization of its capital structure. Tullow’s management recently said USD 500m in liquidity headroom “feels appropriate” – a level the company could struggle to maintain if it fully repays the convertibles and as RBL availability amortizes next year.

Implementing a full-scale restructuring would, however, prove legally challenging, as reported. The 6.625% 2021s were issued from a separate Jersey-based entity, meaning cramming them down alongside the 6.5% 2022s and Tullow’s 7% 2025 notes via an English Scheme of Arrangement is problematic.

This might be surmountable by "doing a Codere", said a lawyer away from the deal, referencing the Spanish company's 2020 restructuring, whereby a new English company could be incorporated and made a co-issuer of all the different bonds. This would allow the company to deal with all its bonds in one Scheme of Arrangement, however would still require consent from the 6.625% 2021s to allow the accession of the new company as co-issuer of the convertible notes.

A more palatable alternative would be to offer the 6.625% 2021 convertible noteholders credit enhancements – such as new second-lien secured notes – in exchange for extending a portion of their holdings, suggested the fourth person.

Tullow presented a revised business and turnaround plan at its Capital Markets Day in November. The company said it believes it can reduce net debt from around USD 2.4bn to between USD 1bn to USD 1.5bn and reduce its gearing to the lower end of 1x to 2x by 2025, or sooner if oil prices prove constructive.

The company projected USD 7bn operating cash flow over the next decade, split evenly between 2021-2025 and 2025-2030. Some USD 2.7bn of this would fund capex, with the remainder being used for debt service and shareholder returns.

Revenue fell 16% YoY in 1H20 to USD 731m and LTM adjusted EBITDAX declined 38% YoY to USD 1bn. The company reported a negative free cash flow of USD 213m for the period, although this was partly due to working capital swings.

The company was insulated from the dramatic oil price swings in 1H20 due to a significant hedging program that saw it realize an average price of USD 51.8/bbl compared to the USD 42.5/bbl it would have achieved without hedging.

Tullow did not respond to a request for comment.